A solution to a system of equations is the set of all points that make all of the equations true.

Generally speaking, to solve a system of equations you need as many unique equations as there are variables.

For simple systems (only two variables) it is often convenient just to graph the equations on a computer or graphing calculator and see where they intercept. By zooming in it is possible to find an answer to several decimal places of precision–more than adequate for most business applications.

Let’s say we are given the following system of equations:

At first glance, this system looks like it will be a little tough to solve algebraically. Luckily, we have our trusty graphing calculator or computer algebra system and we can input them and graph them: 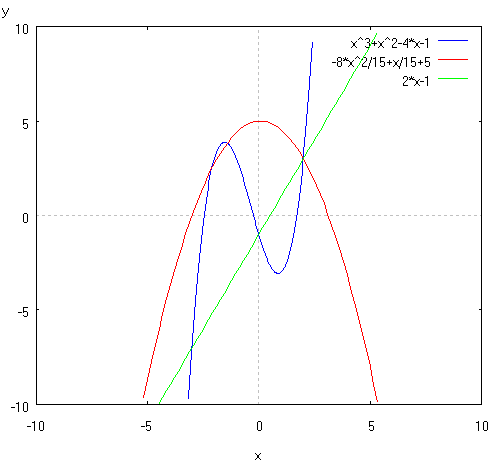 It is immediately apparent that this system has only one solution that lies on all three curves. Putting our cursor over it and zooming in, we find out that it occurs at (2, 3).

Incidentally, while we are not allowed to use computers on the waiver exam, we are allowed calculators. I assume this means that graphing calculators are OK?

Let’s try solving the system of equations above by substitution. We will work with equations (1) and (3) first because they don’t have any fractions and will be easier to deal with. Equation (3) is already solved in terms of y so we can plug it in on the left side of equation (1):

Subtracting the term 2x – 1 from both sides of the equation gives us:

Therefore, (2,3) is the only point that is a solution to the system of all three equations.

Elimination is the other main algebraic method of solving systems. It is usable as long as the equations in the system are either linear, or can be expressed as linear combinations of similar terms (such as some systems of polynomials). The steps are:

As an example, let’s consider the following system of two linear equations:

Both of these equations are already in standard form, so the first step has been done for us.

We want the x terms to cancel, so we start out by multiplying both sides of equation (1) by 3/2:

Now subtract equation (2) from equation (1) to cancel the x terms:

When solving larger systems, many people use matrix notation instead of writing out all of the equations. The process, however, is conceptually identical.