Most everything in this section was tested in the GMAT, so my review will be brief. If your algebra skills are week, I strongly suggest that you find an old textbook and work practice problems. As a former calculus tutor, I can say that most “calculus problems” actually stem from poor algebra skills.

For example, the linear equation, 3x + 4 = 25, has exactly one solution which can be found with simple algebra:

Linear equations are ubiquitous in economics, operations management, and other business disciplines. It is no surprise that they have their own section in this review.

Probably the next most commonly encountered type of equation, after linear equations, is the quadratic equation. These equations have the general form ax2 + bx + c = 0. Because a quadratic is a second order equation, it has two solutions. Note, however, that these solutions are not necessarily real numbers. There are several techniques for solving quadratics. In the “real world” you would probably solve them by graphing them or sticking them in a spreadsheet and using the solver. For this test, however, you need to know how to solve quadratics by factoring and by using the quadratic formula.

Factoring is the process of breaking an expression into simpler terms that multiply together to produce the original expression.

Consider the quadratic equation x2 + x – 12 = 0, which can be solved by factoring the expression on the left of the equals sign into two simpler terms:

The acronym FOIL is a useful mnemonic for remembering how to factor these equations. It stand for First, Outer, Inner, Last.

A = the product of the First two coefficients

C = the product of the Last two coefficients

Sometimes the equation is simple enough that we can figure out the FOIL coefficients in our head. Other times, a more formal approach is warranted. This approach is called the “AC method” or “grouping method in Algebra texts.

Next, we make a table of all of the factors of -24, and their sums:

Splitting the middle term, we have:

We can then factor this by grouping and solve for x:

I will end my discussion of factoring by reminding you of three formulas which can be derived from the FOIL method and often come in handy for general algebra:

Many quadratic equations are simply too messy to solve by factoring. For instance, they might include decimals and/or rational numbers, or the solutions might be complex numbers. Luckily, we have a “brute force” method that always works: the quadratic formula.

The quadratic formula is definitely worth memorizing. To use it, just plug in the coefficients and solve for x, as in the following example: 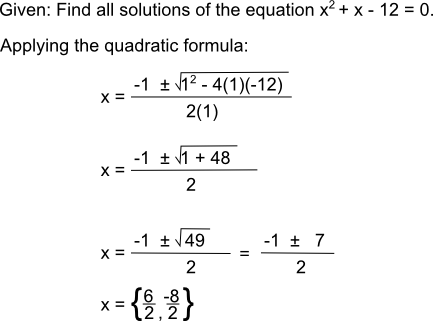 In textbooks and quizzes, inequalities often contain an absolute value term, which is surrounded by vertical bars (||). Should you encounter one of these problems, your best bet is to break it into two inequalities–one for if the term is positive and one for if it is negative–and solve separately. Hopefully, the following example will clarify: 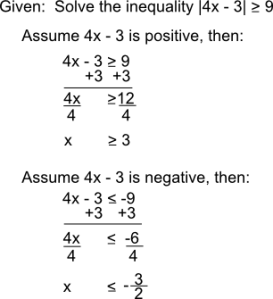 Since this is an inequality in one variable, we can graph it on a number line: